Question 5.
Mention the symbols and atomic numbers of p-block elements. Also show the positions in the periods and groups.
Answer: The group 16 is called the oxygen family.

Question 7.
What are chalcogens?
Answer:
Group 16 elements are called chalcogens or ore-forming elements, as a large number of metal ores are oxides or sulphides.

Question 9.
How does sulphur occur?
Answer:
Sulphur forms 0.034 % by mass of the earth’s crust. In the combined form it occurs as follows :

Question 10.
How do selenium, tellurium and poloniumoccur?
Answer:
Selenium and tellurium are found as metal selenides and tellurides in sulphide ores. Polonium occurs in nature as a decay product of thorium and uranium metals.

Question 16.
Give the names, atomic numbers and electronic configuration of the group 16 elements.
Answer: Question 25.
Bromine has the highest negative electron gain enthalpy as compared to other elements of 4th period. Explain.
Answer:

Therefore Br has the highest electron gain enthalpy as compared to other elements of 4th period.

Question 29.
How does the atomic radii and ionisation enthalpy vary across a period?
Answer:

Question 30.
Why are atomic radii of noble gases larger than those of halogens?
Answer:

Therefore atomic radii of noble gases are larger than those of halogens.

Question 31.
Which element has higher electron affinity among O and S? Why?
Answer:

Question 32.
Why is the first ionisation energy of oxygen lower than that of nitrogen?
Answer:

Question 36.
Explain the trend in the density, melting and boiling points of Group 16 elements.
Answer:
Density :

Therefore the density increases down the group.

The density increases in the order O < S < Se < Te

Question 37.
Explain the following in the case of group 17 elements :
(i) Density
(ii) Melting and boiling point
Answer:
Density :

Question 40.
How do halogens react with other solvents and with hydrocarbons?
Answer:

Question 41.
Explain the trend in the bond dissociation enthalpies of halogen molecules.
Answer:

Question 42.
Why does the density of halogens increase on moving down the group?
Answer:
The bond dissociation enthalpies of halogen molecules decrease down the group with an increase in atomic size.

Question 43.
Why do melting and boiling points of halogens increase on moving down the group?
Answer:

Question 46.
Oxygen generally exhibits an oxidation state of – 2, whereas the other members of its family show oxidation states of +2, +4 and +6 as well. Explain.
Answer:

Question 47.
Why is H2O a liquid and H2S a gas?
OR
Water is a liquid and other hydrides of the group, are gases. Explain.
Answer:

Hence H2O is a liquid and H2S (and other hydrides) is a gas.

The reasons for anomalous behaviour of fluorine are as follows :

Question 51.
At room temperature hydrogen fluoride is a liquid while all other hydrogen halides are gases. Explain.
Answer:

Hence HF is a liquid while other hydrogen halides (HCl to HI) are gases.

Question 53.
What is the oxidation state of S in H2S2O6?
Answer:

Question 58.
Why does the tendency of group 16 elements to exist in -2 oxidation state decrease on moving down the group?
Answer:

Question 61.
Explain the reactivity of group 16 elements with hydrogen.
Answer:

Question 62.
Explain the general structures of hydrides of group 16 elements.
OR
Give reason : Bond angle decreases from H2O to H2S.
Answer:

(2) Volatility : Volatility of hydrides increase from H2O to H2S and then decreases. H2O < H2S > H2Se > H2Te
At ordinary temperature H2O is a liquid while all other hydrides are gases.

Question 64.
Giving suitable reasons, arrange the hydrides of group 16 elements in the decreasing order of their thermal stability.
Answer:

Question 67.
“The reducing power of the hydrides of group 16 elements increases from H2S to H2Te”. Explain.
Answer:

Question 69.
Give reasons : H2S has a lower boiling point than H2O.
Answer:

Question 70.
Among the hydrides of group 16, water shows unusual properties. Why?
Answer:

Question 71.
Explain the reactivity of halogens towards hydrogen.
Answer:

Unlike other hydrogen halides, HF does not dissociate releasing hydrogen, hence HF is not a reducing agent.

Question 75.
Why is HCl a weaker acid than HI?
Answer:

Question 76.
Why is HF a weaker acid than HCl2
Answer:

Question 77.
Arrange the halogen acids in the decreasing order of :
(1) thermal stability
(2) acidic strength.
Answer:
(1) Thermal stability : As the atomic size increases from F to I, the bond dissociation enthalpy of H-X decreases.
Thus, the thermal stability of hydrogen halides decreases down the group in the order HF > HCl > HBr > HI

(2) ACldic strength : Since, the bond dissociation enthalpy of H-X decreases down the group, the acidic strength varies in the order HI > HBr > HCl > HF

Question 81.
Explain the reactivity of halogens towards oxygen.
Answer:

For a particular halogen, higher oxides are more stable than the lower ones.

Question 83.
Explain the reactivity of group 16 elements towards halogens.
Answer:

Question 85.
Explain the reactivity of halogens towards other halogens.
OR
What are interhalogen compounds?
Answer:

Question 86.
Explain the reactivity of Group 18 towards halogens.
Answer:

Question 87.
What is the action of metals on group 16 elements?
Answer:
Metals react with O, S, Se to form oxides, sulphides and selenides respectively. 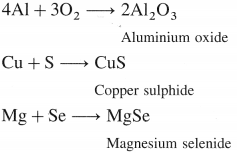 Question 89.
Explain the reactivity of halogens with metals.
Answer:

Question 90.
Explain the property of allotropy in Group 16 elements.
Answer:

Question 95.
Write the structures of oxyacids of sulphur. Write the oxidation number of sulphur.
Answer: Question 98.
Which are different oxyacids (or oxoacids) of halogens?
Answer:
Fluorine forms only one oxyacid namely, hypofluorous acid or fluoric acid, HOF while other halogens form several oxyacids.

(ii) By the thermal decomposition of metal oxides.

Question 102.
How is oxygen prepared by thermal decomposition of certain metallic oxides?
Answer: 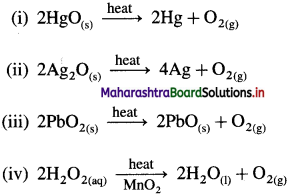 Question 105.
What is the action of heat on KClO3?
Answer:
Laboratory methods :
(i) By heating chlorates, nitrates and permanga­nates.
Potassium chlorate in the presence of manganese dioxide on heating decomposes to form potassium chloride and oxygen.
\(2 \mathrm{KClO}_{3} \frac{\Delta}{\mathrm{MnO}_{2}} 2 \mathrm{KCl}+3 \mathrm{O}_{2(\mathrm{~g})}\)

Question 106.
Write the reactions of dioxygen with
(i) ZnS
(ii) CH4
Answer:

Question 109.
What are oxides? How are they classified? Give examples.
OR
What are the different types of oxides? Give example.
Answer:
The oxides are binary compounds in which one element is oxygen and another may be a metal or a non-metal.
They are classified as follows :

Along the period, from left to right the nature of oxides changes from basic to amphoteric to acidic.

(4) Neutral oxide : The oxide which behaves neither acidic nor basic is called a neutral oxide.
For example, CO, NO, N2O. 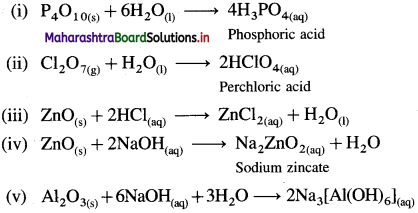 Question 113.
Explain the nature of zinc oxide with the help of the reactions.
OR
Explain with chemical reactions, why is zinc oxide amphoteric in nature.
Answer:

Question 114.
What is ozone umbrella?
OR
Explain Ozone as a protective umbrella for UV from sun.
Answer:
The stratospheric pool of ozone which is a layer above earth’s surface and protects from harmful high energetic ultraviolet (UV) rays is called the ozone umbrella or ozonosphere.

Question 119.
What is meant by ozone depletion?
Answer:
The thinning of the ozone layer in the upper atmosphere is called ozone depletion. This thinning has been more pronounced in the polar regions, especially over the Antarctica.

Question 120.
How does ozone protect the people of the earth?
Answer:
Ozone layer in the upper atmosphere absorbs the harmful high energetic UV radiations of the Sun and protects the earth. The ultraviolet radiations damage plant and animal life on earth.

Question 121.
How do exhaust systems of cars and supersonic jet aeroplanes deplete the concentration of ozone layer?
Answer:
The exhaust gases from cars and supersonic jet aeroplanes contain nitric oxide (NO), which combines with ozone in the atmosphere forming oxygen.
NO + O3 → NO2 + O2
Hence the concentration of ozone is depleted in the upper layer of the atmosphere.

Question 122.
How do the coolents in refrigerants deplete the concentration of ozone?
Answer:

Thus Cl- propagates the destruction of ozone in the atmosphere.

Question 125.
What are the uses of ozone?
Answer:
Uses of Ozone :

Question 126.
How is sulphur dioxide prepared?
Answer:
Sulphur dioxide, SO2 is prepared by following methods :
(1) From sulphur : When sulphur is burnt in air or oxygen, SO2 is formed along with SO3.

(3) Industrial method (From sulphides): It is obtained as a by-product in the roasting of ores of pyrites and blendes.

The gas is dried and liquefied under pressure and stored.

Question 132.
What are the physical properties of H2SO4?
Answer:

Question 133.
How is a solution of H2SO4 prepared from concentrated sulphuric acid solution?
Answer:

Question 135.
Why is sulphuric acid a strong acid?
Answer:
Sulphuric acid ionises in an aqueous solution in two steps as follows :

The larger value of Ka (Ka >10) shows more dissociation of the acid into H3O+ and H2SO4. Thus H2SO4 is a strong acid. 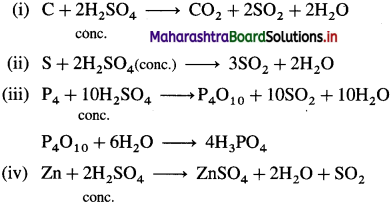 Question 140.
In the dissociation of H2SO4 in water, why is the second dissociation constant smaller than the first?
Answer:

Question 141.
Mention the conditions to maximize the yield of H2SO4 by contact process.
Answer:

Question 144.
How is chlorine obtained from HCl?
Answer:
Chlorine is obtained by the oxidation of hydrochloric acid by various oxidising agents: 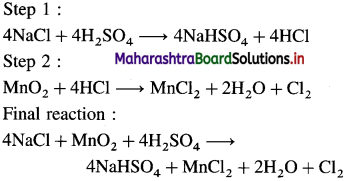 Question 147.
How is chlorine manufactured by the electrolytic process?
Answer:

Question 151.
What is the action of chlorine on
(i) hydrogen
(ii) hydrogen sulphide?
OR
Give two reactions to show the affinity of hydrogen towards chlorine.
Answer:
(i) Since chlorine has high affinity for hydrogen, it forms hydrogen chloride in the presence of sunlight.
\(\mathrm{H}_{2}+\mathrm{Cl}_{2} \stackrel{h v}{\longrightarrow} 2 \mathrm{HCl}\)
(ii) Chlorine reacts with hydrogen sulphide to form hydrogen chloride and sulphur.
H2S + Cl2 → 2HCl + S

Question 152.
What is the reaction of chlorine with ammonia?
Answer:

Question 153.
Explain the reactions of chlorine with alkalies.
Answer:

Question 154.
What is the action of chlorine on
(i) methane and
(ii) ethylene?
Answer:
(i) With methane, chlorine forms substituted products. Question 157.
Explain disinfecting action of chlorine.
OR
Chlorine is used for the sterilization of water. Explain.
Answer:
(i) Since chlorine has an ability of killing harmful micro-organisms, it acts as a good disinfecting agent.
(ii) This ability is due to the oxidising nature of chlorine which produces nascent oxygen in aqueous solutions.
H2O + Cl2 → HCl + HOCl
HOCl → HCl + [O] 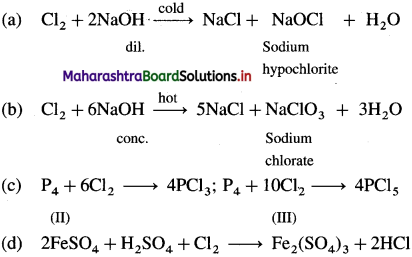 Question 161.
What are the physical properties of hydrogen chloride gas?
Answer:

Question 163.
What is aquaria? What is the action of aquaria on (i) Au and (ii) Pt?
Answer:
A mixture of three parts of concentrated HCl solution and one part of concentrated HNO3 solution is known as aquaria.

This high solubility is due to the formation of nascent chlorine. 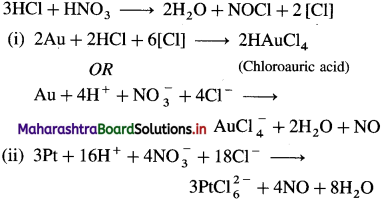 (ii) As the ratio of radii of X and X’ increases, the number of atoms of X’ per molecule of interhalogen compound increases. For example, iodine having the largest size with fluorine of the smallest size forms stable IF7.

(ii) As the ratio of radii of X and X’ increases, the number of atoms of X’ per molecule of interhalogen compound increases. For example, iodine having the largest size with fluorine of the smallest size forms stable IF7.

(a) By direct combination :

(b) By the reaction of halogen with interhalogen compound :

(c) SpeClal reaction for the preparation of ICl :

Question 170.
Give the physical states of the following molecules :
BrCl, IBr, IF5, BrF5, ClF3, IF7
Answer:

Question 176.
Give the disproportionation reactions given by the following :
(i) BrF
(ii) ClF3
(iii) ICl3
Answer: Question 179.
Complete the given table :

Question 180.
Explain IC1 is more reactive than I2.
Answer: 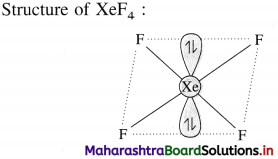 Question 223.
Select and write the most appropriate answer from the given alternatives for each sub¬question :

29. The bleaching action of chlorine is due to
(a) oxidation
(b) reduction
(c) neutralisation
(d) double decomposition
Answer:
(a) oxidation

44. The most powerful oxidising agent is :
(a) Fluorine
(b) Chlorine
(c) Iodine
(d) Bromine
Answer:
(a) Fluorine

47. Which of the following halogen is radioactive in nature?
(a) Chlorine
(b) Bromine
(c) Iodine
(d) Astatine
Answer:
(d) Astatine