Question 1.
What are d-block elements? Give their general electronic configuration.
Answer:
Definition : d-block elements are defined as the elements in which the differentiating electron enters d-orbital of the penultimate shell i.e. (n – 1) d-orbital where ‘n is the last shell.

Question 4.
Why are most of the d-block elements called transition elements?
Answer: Question 6.
Represent the elements in the four series of transition elements.
Answer: Question 16.
Why is manganese more stable in the + 2 state than the + 3 state and the reverse is true for iron?
Answer:

Question 26.
Explain the variation in melting points of the transition elements.
Answer:

Question 34.
How do metals Fe, Co, Ni acquire permanent magnetic moment?
Answer:
The transition metals Fe, Co and Ni are ferromagnetic. When the magnetic field is applied, all the unpaired electrons in these metals (and their compounds) align in the direction of the applied magnetic field. Due to this the magnetic susceptibility is enhanced and these metals can be magnetised, that is, they acquire permanent magnetic properties.

Question 35.
In which oxidation state, is vanadium diamagnetic?
Answer:

Question 39.
Explain the effective magnetic moment of the species.
Answer:

Question 40.
What is the importance of magnetic moment (μ)?
Answer: Question 43.
Calculate the magnetic moment of a divalent ion in an aqueous solution, if its atomic number is 24.
Answer:
(1) The electronic configuration of divalent inri M2+ having atomic number 24 is.

Question 44.
When does a substance appear coloured?
Answer:
A substance appears coloured when it absorbs a portion of visible light. The colour depends upon the wavelength of absorption in the visible region of electromagnetic radiation.

Question 45.
Why do the d-block elements form coloured compounds?
Answer:

Question 46.
How is complementary colour of a compound identified?
Answer:

For example if red colour is absorbed then transmitted complementary colour is green. 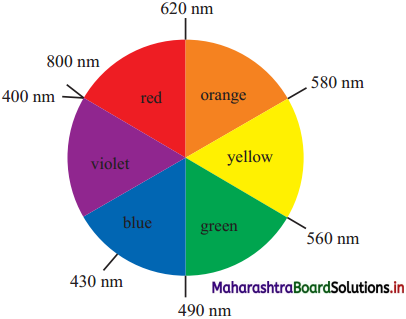 Question 50.
Explain : The compounds of Cu(II) are coloured.
Answer:

Question 51.
Explain why the solution of Ti3+ salt is purple in colour.
OR
Why is Ti3+ coloured? (atomic number Ti = 22)
Answer:

Question 52.
What will be the colour of Cd2+ salts? Explain.
Answer:

Question 54.
Explain why is cobalt chloride pink in colour when dissolved in water but turns deep blue when treated with concentrated hydrochloric acid.
Answer:

Question 55.
Explain the catalytic properties of the rf-block or transition metals.
Answer:

Question 57.
What are interstitial compounds of transition metals?
Answer:

Question 55.
What are the properties of the interstitial compounds of transition metals?
Answer:

Question 56.
What are interstitial compounds? Why do these compounds have higher melting points than corresponding pure metals?
Answer:

Question 57.
Explain the formation of alloys of transition metals.
Answer:

Question 60.
What are the uses of alloys?
Answer:

The liquid is filtered through glass wool or sintered glass and evaporated. Potassium manganate crystallises as small, blackish crystals.

The electrolytic solution is filtered and evaporated to obtain deep purple black crystals of KMn04.

Question 62.
What is meant by the disproportionation of an oxidation state? Explain giving example of manganese.
Answer:

Question 63.
Give examples of oxidising reactions of KMnO4.
Answer:
(1) KMnO4 in acidic medium : Less soluble sodium sulphate crystallises out as Na2SO4.10H2O. which is filtered off.
(4) Conversion of Na2Cr2O7 into K2Cr2O7 : Concentrated solution of Na2Cr2O7 is treated with KCl on by double decomposition, K2Cr2O7 is obtained.
Na2Cr2O7 + 2KCl → K2Cr2O7 + 2NaCl
On concentrating and cooling the solution, less soluble orange coloured K2Cr2O7 crystallises out which is filtered and purified by recrystallisation.

Question 68.
What happens when hydrogen sulphide gas (H2S) is passed through acidified K2Cr2O7 solution?
Answer:
When hydrogen sulphide (H2S) gas is passed into solution of K2Cr2O7, H2S is oxidised to a pale yellow solid (precipitate) of sulphur. Orange coloured solution becomes green due to formation of chromic sulphate (green coloured).

Question 71.
Give examples to show that elements of first row of d-block elements differ from second and third row with respect to the stabilisation of higher oxidation states.
Answer:

(2) Combined form : The metals which are reactive occur in the combined state with other elements forming compounds like oxides, sulphides, sulphates, carbonates, silicates, etc.

Question 73.
What are minerals?
Answer:
Minerals : They are naturally occurring chemical substances in the earth’s crust containing metal in free state or in combined form and obtainable from mining are called minerals. For example, haematite Fe203, galena PbS, etc.

Question 74.
What are ores?
Answer:
Ores : The minerals containing a high percentage of metals from which metals can be profitably extracted are called ores.
[Note : Every ore is a mineral but every mineral is not an ore.]

Question 75.
Write names of minerals and ores of Iron, Copper and Zinc.
Answer:

Question 76.
What is metallurgy?
Answer:
Metallurgy : The process of extraction of metal in a pure state from its ore is called metallurgy.

Question 78.
What is gangue?
Answer:
Gangue : The earthly and undesired impurities of various substances like sand (SiO2), metal oxides, etc. present in the ore are called gangue or matrix.

The common methods of concentration of ore are as follows :

The method depends upon the nature of ore.

Question 82.
What is roasting of an ore?
Answer:
Roasting : It is a process of strongly heating a concentrated ore in the excess of air below melting point of metal, to convert it into oxide form. It is used for a sulphide ore. For example, ZnS ore on roasting forms ZnO.

Question 84.
Explain the term : Smelting
Answer:
Smelting : The process of extraction of a metal from its ore by heating and melting at high temperature is called smelting. Reduction of ore is carried out during smelting.

Question 85.
What is calcination?
Answer:
Calcination is a process in which the ore is heated to a high temperature below the melting point of the metal in the absence of air or limited supply of air in a reverberatory furnace.

It is generally used for carbonate and hydrated oxides to convert them into anhydrous oxides.

Question 86.
Define the terms :
(1) Flux
(2) Slag
Answer:
(1) Flux : A flux is a chemical substance which is added to the concentrated ore during smelting in order to remove the gangue or impurities by chemical reaction forming a fusible mass called slag.
(2) Slag : It is a waste product formed by combination of a flux and gangue (or impurities) during the extraction of metals by smelting process.

Iron is the fourth most abundant element in the earth’s crust.

Question 90.
Why is limestone used in the extraction of iron?
Answer:

Therefore in the extraction of iron, lime is used.

Question 91.
Name the furnace in which iron is extracted from Haematite ore.
Answer:
Extraction of iron is carried out in Blast furnace.

Coke is used for the reduction of ore.

To remove acidic gangue SiO2, a basic flux CaO is used which is obtained from lime stone CaCO3.

The extraction process involves following steps :
(1) Concentration of an ore : The powdered ore is concentrated by gravity separation process by washing it in a current of water. The lighter impurities (gangue) are carried away leaving behind the ore.
(2) Roasting : The concentrated ore is heated strongly in a limited current of air. During this, moisture is removed and the impurities like S, As and phosphorus are oxidised to gaseous oxides which escape.

After roasting, the ore is sintered to form small lumps.
(3) Reduction (or smelting) : The roasted or calcined ore is then reduced by heating in a blast furnace. The blast furnace is a tall cylindrical steel tower about 25 m in height and has a diameter about 5-10m lined with fire bricks inside.

At the top, there is a cup and cone arrangement to introduce the ore and at the bottom, tapping hole for withdrawing molten iron and an outlet to remove a slag.

The roasted ore is mixed with coke and limestone in the approximate ratio of 12 : 5 : 3.

A blast of hot air at about 1000 K is blown from downwards to upwards by layers arrangement. The temperature range is from bottom 2000 K to 500 K at the top. The charge of ore from top and the air blast from bottom are sent simultaneously. There are three zones of temperature in which three main chemical reactions take place.

(i) Zone of combustion : The hot air oxidises coke to CO which is an exothermic reaction, due to which the temperature of furnace rises.
C + 1/2 O2 → CO ΔH= – 220kJ
Some part of CO dissociates to give finely divided carbon and O2.
2CO → 2C + O2
The hot gases with CO rise up in the furnace and heats the charge coming down. CO acts as a fuel as well as a reducing agent.

The slag is removed from the bottom of the furnace through an outlet.

(iv) Zone of fusion : The impurities in ore like MnO2 and Ca3(PO4)2 are reduced to Mn and P while SiO2 is reduced in Si. The spongy iron moving down in the furnace melts in the fusion zone and dissolves the impurities like C, Si, Mn, phosphorus and sulphure. The molten iron collects at the bottom of furnace. The lighter slag floats on the molten iron and prevents its oxidation.

The molten iron is removed and cooled in moulds. It is called pig iron or cast iron. It contains about 4% carbon.

Question 97.
How is pure iron obtained from crude iron?
Answer:
Pure iron can be obtained by electrolytic refining.

Question 101.
(A) What are f-block elements?
(B) What are inner transition elements?
Answer:
(A)

(B) f-block elements are called inner transition elements since f-orbital lies much inside the f-orbital in relation to the transition metals, These elements have 1 to 14 electrons in their f-orbital.

Question 103.
What are lanthanoids (or lanthanides)?
OR
What is the lanthanoid series?
Answer:

Question 104.
What are rare earths?
Answer:

Question 106.
Explain the meaning of inner-transition series.
Answer:
A series of f-block elements having electronic configuration (n – 2)f1-14 (n – I) d0-1 ns2 placed separately in the periodic table represents inner transition series. The f-orbitals lie much inside the e/ orbitals.

Since the last electron enters pre-penultimate shell, these elements are inner transition elements.

Question 107.
Draw a skeletal diagram of the periodic table to show the position of d and/- block elements.
Answer: Question 108.
What are the properties of lanthanoids?
Answer:

Question 109.
Explain the variations in ionisation enthalpy of lanthanoids.
Answer:

First, second and third ionization enthalpies of lanthanoids in kj/mol

Question 110.
Give the general electronic configuration of 4f-series elements (OR lanthanoids).
Answer:

Question 111.
What are the important features of the electronic configuration of lanthanoids?
Answer: Question 115.
Why are the expected and observed ground state electronic configurations of gadolinium and lawrencium same?
Answer:

Question 123.
Display electronic configuration, atomic and ionic radii of lanthanoids.
Answer:
Answers are given in bold. Question 124.
Explain the trend in atomic and ionic sizes of lanthanoids.
Answer:

Question 130.
The salts of (1) La3+ and (2) Lu3+ are colourless. Explain.
Answer:
(1) (i) La3+ has electronic configuration, [Xe] 4f°
(ii) Since there are no unpaired electrons in 4 f-orbital, f → f transition is not possible. Hence La3+ ions do not absorb radiations in visible region, and they are colourless.

(2) (i) LU3+ has electronic configuration [Xe] 4 f14
(ii) Since there are no unpaired electrons in 4f-orbital, f → f transition is not possible. Hence Lu3+ ions do not absorb radiations in visible region and they are colourless.

Question 133.
What are the application of lanthanoids?
Answer:

Question 134.
What are actinoids? Give their general electronic configuration.
Answer: Question 143.
What are the applications of actinoids?
Answer:

Question 144.
What are transuranic elements?
Answer: Question 150.
Select and write the most appropriate answer from the given alternatives for each sub-question :

11. Which one of the following elements does not exhibit variable oxidation states?
(a) Iron
(b) Copper
(c) Zinc
(d) Manganese
Answer:
(c) Zinc

13. Which one of the following transition elements shows the highest oxidation state?
(a) Sc
(b) Ti
(c) Mn
(d) Zn
Answer:
(c) Mn

22. Which one of the following elements belong to the actinoid series?
(a) Cerium
(b) Lutetium
(c) Thorium
(d) Lanthanum
Answer:
(c) Thorium